I’ve seen several recent news items about GPS tracking systems being used in different contexts to keep tabs on people. Most of them work in essentially the same way. A device is attached to something that doesn’t stay in once place (like, say, a taxi — or maybe a child). This device reports its position to a GPS satellite, which interfaces with software that tracks whatever it is you’re trying to keep tabs on. 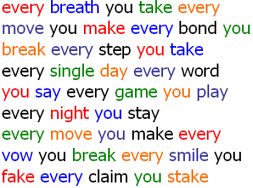 I’m sensitive to these types of things partly because I have a GPS unit in my car. My navigation system doesn’t tell anyone (except me) where I am, but it wouldn’t be hard to start tracking my car with a little additional hardware and a lot of additional infrastructure. What really bothers me, though, is how much we seem to be embracing these new spying technologies.

The first story was about a tracking system for taxi drivers in Philadelphia. Apparently, the devices are installed in cabs and constantly report their locations to dispatchers. Cabbies claim that the system violates their rights to privacy, as well as those of their clients. Since they only have fares 25 – 30 percent of the time, and they also use the cabs for personal use, the GPS units unfairly track their personal activities. The cab companies claim that the systems will make their drivers more efficient and keep costs down.

Another application of the same technology allows parents to keep track of their children. Parent Mark Pawlick installed a tracking system in his sixteen-year-old daughter’s car without her knowledge. In this case, the parents use technology as a substitute for good parenting. Rather than taking away the car keys when the child proves untrustworthy, they perpetuate the cycle of mistrust by spying on the kid. Dad gets a call on his cell phone every time she exceeds the speed limit, and he can flash the car’s lights and honk the horn until she slows down. He also gets a call when she goes somewhere that she’s not supposed to be. For her part, the girl has found ways to beat the system. On the day the story was recorded, she was pulled over for speeding, but Dad didn’t know it because she was in his car. She brags that she gets out of a ticket every time she’s pulled over. The story mentioned similar technologies used in kids’ cell phones, which are conveniently “forgotten” or turned off when they don’t want to be tracked.

In a slightly different application, the US Department of Agriculture is using GPS technology in combination with aerial photography to keep tabs on farmers. I don’t know very much about agriculture, and even less about agricultural bureaucracy. Apparently, farm subsidies are tied to specific land uses. If a farmer has enrolled some land in the Conservation Reserve Program, he receives a subsidy, but only if his use of the land is in compliance with the CRP. The Department of Agriculture is spending tens of millions of dollars to photograph every farmer’s field, and tie those photographs (via GPS) to the land use agreements. This allows them to see whether the land is being used approrpriately. Proponents claim the system will save taxpayer dollars by uncovering fraud while protecting the environment by ensuring that native praire and wetlands are preserved.

We’re apparently keeping track of senior citizens, too. Some assisted-living facilities track the movements of their residents, keep track of when and how long they sleep, how much they eat, and where they go and what they do. In some systems, family members can track the residents, too, through a web application. The system is highly touted for its security and its ability to summon help when needed. If a resident stops breathing, help is immediately dispatched. If an Alzheimers sufferer becomes disoriented, health care providers can easily located him or her and get them help.

What does all of this have to do with schools? We’ve talked about RFID chips and student IDs. We could develop a system that automatically takes attendance, for example, as each student walks into the building (or classroom). We could know, during an emergency, where every student is, and whether anyone is missing. We already track what students eat (or, at least, what they buy) in the cafeteria. We know which books they check out from the library. We know where and when they use computers, and which sites they visit on the Internet. But all of these systems are easily defeatable. “I don’t want to go to school today. Can you take my ID badge, so they won’t know I’m missing?”

As we trade privacy for accountability, we have to remember that the technology alone will not solve our problems. Having computers follow people around and record what they do will not change their behavior. It’ll only make them more resentful as they find innovative ways to beat the system.