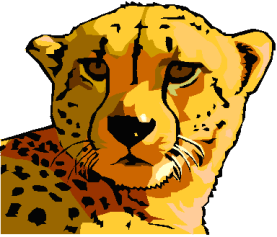 Maybe not. It was just the Sound and Video Catalog at the Cornell Lab of Ornithology Macaulay Library. Despite the fact that there aren’t any cheetahs, the catalog does have an impressive collection of animal recordings, some of which date back half a century or more. Many also have video. As you’d expect from a lab of ornithology, there are lots of birds. But I also found whales, sea lions, various primates, and quite a few amphibians.

According to the site, they have the world’s largest collection of animal sounds, with more than 160,000 recordings covering 2/3 of the world’s birds. Their collection of sounds of insects, fish, frogs, and mammals is also rapidly growing.

While not all of the collection is available online, quite a few recordings are. Most are in RealAudio format. The site recommends using the Ravenviewer software, which allows you to view waveforms and spectrographs of the sounds as you listen. You can still hear the sounds with RealPlayer, though.
Oh, and the red-winged blackbird is here.

One thought on “Thought I Heard a Red-Winged Blackbird”