As a graduate student, I was required to take a course called “Foundations of Modern Education.” It was probably the most demanding of the courses I took for that degree. One of the major themes of this course was the erosion of community, especially in America. Prior to the 1950’s, Americans lived in neighborhoods. They worked, went to school, shopped, worshiped, and played in those communities. They tended to stay there for generations. So the kids in my class at school would be the same kids I saw in church on Sunday. My friends’ parents would work with my Dad at a company right here in our town. When Mom went to the grocery store, she’d run into people she knew from church, who were the Moms of kids on my baseball team. The community was interconnected. When someone needed help, everyone was there to pitch in. We celebrated and mourned and learned and played and worked together. 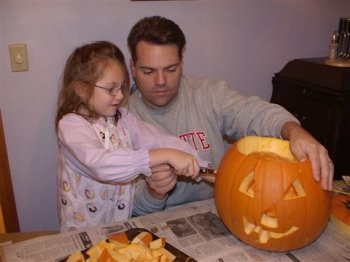 My childhood wasn’t like that at all. By the time the 70’s rolled around, we had started to spread out. Because I lived on the boundary of the school district, the kids who lived next door went to a different school. Dad worked in a factory 30 minutes away. We went to a church on the other side of town. The community had started to separate.

After college, things became even more disperse. For a while, I was living in Stow, going to church in Brecksville, and working in Hudson. Most of my family lived in Youngstown. My life was very segmented. Over here are the work people. Over there are the people who live in my neighborhood. The groups never intersected. While that arrangement has certain advantages (especially for a middle school teacher), it tends to force us into roles that we play in those various circumstances.

So, at work, I’m the technology professional. Hopefully, people perceive me as being on the ball. I like to think that I’m generally prepared, proactive, and reasonably conscientious. At home, I’m much more laid back. So that toilet repair might take a couple, err, years. At home, I do use technology occasionally, but I’m also a musician and brewer and gardener and Dad. But because the people I interact with only see me in the one situation, they don’t get a clear picture of who I am as a whole. I play different roles in different situations.

Over the last couple years, though, I’ve become much more involved in the online community. Strangely, this group transcends those artificial divisions I’ve always had. In Facebook, for example, I have some colleagues from work. I also have some family members, and people from my church, and some people I grew up with. There are parents from my kids’ violin classes, former students of mine, and fellow brewers. Then, there are other educational technology people I’ve only met online, some of whom I count among my closest friends.

Maybe that’s what it is about social networking that scares so many people. Once you go online, it’s nearly impossible to keep your life segmented. If you follow me on Twitter, you follow me on Twitter.  You don’t follow me the teacher, or me the technologist, or me the writer, or me the (choke) philosopher. You follow me. I can’t pretend to be just a part of myself online, because the whole personality comes through. But that’s okay. It’s only dangerous for people who rely on their roles to shape others’ perceptions of them. I like to think that it’s a more honest, genuine picture of me.