Last week, I mentioned that the world produced an estimated 1.5 exabytes of information last year. This statistic came from Karl Fisch’s Did You Know? presentation. He got this number from an Ian Jukes presentation, and Ian’s source is a Berkeley study from 2003. As it turns out, the Berkeley study later revised its numbers to 5 exabytes of new information, and these numbers were for 2002. In the five years since then, the rate of growth has increased exponentially.

This week, CNN reported on an IDC study that claims a growth of digital information in 2006 of 161 exabytes. This number is inflated, because they’re counting multiple copies of the same information in order to get an handle on how much storage space is being used. Still, they estimate that 40 exabytes of unique new data was created in 2006. That’s eight times as much as in 2002. 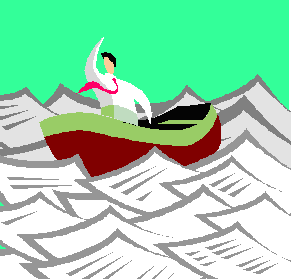 Let’s put this in perspective. The world’s population in 2006 was about 6.5 billion people. On average, each of these people generated 6.5 gigabytes of new information. That’s almost 10 CDs’ worth of data per person. I’m pretty sure I didn’t contribute my fair share. Some people like to compare this stuff to the Library of Congress. The Library of Congress is the largest library in the world, with 530 miles of shelves. If everything in the LOC were digitized, it would take about 20 terabytes of space to store it. One exabyte is one million terabytes. That means the world produced 2 million Libraries of Congress (LOCs) worth of new information in 2006, and that this data, if printed, would take more than 1 billion miles of shelf space. Of course, there are no plans to either digitize the LOC or to print out the Internet.

And they have to figure out how to make a backup of 65 billion CDs before next year’s 90 billion CDs’ worth of information shows up.