I was composing an email about our upcoming curriculum mapping project. I try to be grammatically correct most of the time. It really annoys me when people mess up subject-verb agreements or possessives. I’ve read Eats, Shoots and Leaves. I listen to Grammar Girl. I even tuned in to The Word Nerds for a year or so. Most of the time, I can put words together in a more-or-less intelligent fashion. But this one had me stumped.

For each content standard, there are one or more indicators.

For each content standard, there is one or more indicator.

So which is it? Fortunately for me, my office is fifteen feet from the English department. First, I asked a senior English and creative writing teacher. “I would say to use ‘there are,’ because you have ‘more’ in there,” she concluded. But check with the teacher next door. He’s the Grammar Nazi. 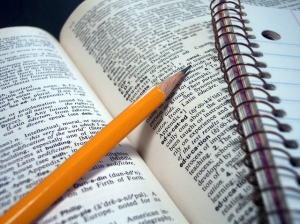 The second teacher looked at the two sentences for a minute. “Start with ‘there’ and it becomes clear,” he said. “‘There is one or more indicator for each content standard.’ When you have a compound subject joined by ‘or’, you use the subject closer to the verb.” I had never heard this rule, and I thought he was making it up.

I went back to the first teacher. She dug through the storage cabinet for a grammar book (this one, if you care). There it was, on page 136: “When the parts of a compound subject are joined by or or nor, the verb should agree with the part closest to it.” The grammar Nazi was right!

Just to make sure, I asked another teacher for a third opinion. He advised me to rewrite the sentence. “Good writers avoid problems like that,” he reported.

“Average writers work around the problem,” I responded. “Good writers know the rules.” When pressed, he went for the plural. I told him about the rule in the grammar book. “That doesn’t apply when the verb precedes the subject,” he told me. I thought he was making this up, too. I’m not very trusting of rule-quoting grammarians.

Back to the Grammar Nazi. “The book doesn’t say anything about the subject coming before the verb. It shouldn’t matter.”

Not reaching consensus in the English department, I went online. Here’s what I found:

I like the first one especially. It practically says, “the English teacher across the hall will make up some bogus rule to justify his error. Don’t believe him.” In the end, I went with the singular. I wonder if the email recipients will even notice.

What does this have to do with technology? Everything. We’re judged on how we communicate. As tech geeks, we sometimes dismiss people who don’t have really basic tech skills. Yesterday, for example, I endured a presentation by a software vendor. She came in with a flash drive, and didn’t know how to connect it to the computer. She finally launched her Powerpoint presentation, and couldn’t navigate with the touch pad. When she got ahead of herself in the presentation, she had to quit PowerPoint and start over. Did that affect my perception of her competence, and my feelings about the software she was selling? You bet.

In the same way, when I read poorly written or grammatically incorrect text, it lowers my opinion of the author. Tech people are notoriously bad about this. I’ve seen brilliant technology people attacked for their poor writing skills. In a school environment, it’s especially important, because academic institutions should have higher literacy standards than anyone else.

It matters. Learn to write.