I know you’re all very busy with final preparations for the big holiday, but I wanted to take a few moments to wish you all a happy Ohio Day. For those who have forgotten, Ohio Day is the annual celebration of Ohio’s statehood, which retroactively took place March 1, 1803.

Remember, the Ohio flag is supposed to ceremonially replace the Stars and Stripes at dawn on March 1, and remain flying until dusk. If you haven’t procured your flag yet, I’m afraid you’re probably out of luck. I’m sure the few stores that aren’t closed for the holiday will be sold out by now. And for crying out loud, try not to fly it upside down again this year. In the past, there’s been some concern about the propriety of removing the American flag, even for a day. Of course, this is done as an acknowledgment of the Republic for which it stands. 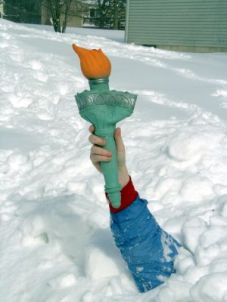 The snow this year has hampered our efforts at patriotism somewhat, but somehow the love for America always seems to shine through. I just hope it melts before July Fourth.

If you haven’t yet learned the words to Beautiful Ohio, there’s still time. Head over to Ohio History Central, where you can read the lyrics and listen to the song. Then, you can amaze your friends when you sing it at work on Monday.

If that’s too much trouble, just stop at iTunes and pick up the recording of the McCoys’ Hang on Sloopy. As you’re well aware, Ohio is the only state with an official rock song. The actual resolution making it so reads, in part:

WHEREAS, Adoption of this resolution will not take too long, cost the state anything, or affect the quality of life in this state to any appreciable degree, and if we in the legislature just go ahead and pass the darn thing, we can get on with more important stuff; and

WHEREAS, Sloopy lives in a very bad part of town, and everybody, yeah, tries to put my Sloopy down; and

WHEREAS, Sloopy, I don’t care what your daddy do, ’cause you know, Sloopy girl, I’m in love with you;

therefore be it Resolved, That we, the members of the 116th General Assembly of Ohio, in adopting this Resolution, name “Hang On Sloopy” as the official rock song of the State of Ohio; and be it further Resolved, That the Legislative Clerk of the House of Representatives transmit duly authenticated copies of this Resolution to the news media of Ohio.

(Note for those outside Ohio: I didn’t make this up — really — See http://www.ohiohistorycentral.org/entry.php?rec=1878).

I’m sure all of the theater showings are sold out for the weekend, but you may be able to find a used copy of the DVD Beautiful Ohio at some second-rate video store. It’s probably mislabled, which would be the only reason it’s still available. If that falls through, you can probably catch the rebroadcasts of the Apollo 11 or Mercury Atlas 6 missions on Nasa TV tomorrow, the documentary about the Wright brothers on the History Channel, or the 2003 Fiesta Bowl on ESPN Classic.

Of course, if you’re actually in Ohio, you’ll be able to attend the numerous parties, concerts, and galas celebrating the Buckeye state. Just try to be patient with the visitors. They may not understand all of the local customs.

If you happen to live in some unenlightened place that doesn’t celebrate Ohio Day, take consolation in the fact that it marks the beginning of the Independence Day planning season, with only 125 days separating it from that lesser-known holiday.

Oh come let’s sing Ohio’s praise
And songs to Alma Mater raise
While our hearts rebounding thrill
With joy which death alone can still
Summer’s heat or winter’s cold
The seasons pass the years will roll
Time and change will surely (truly) show
How firm thy friendship … OHIO!

One thought on “Happy Ohio Day”