For the first week in Mbita, I kept asking myself (and others), “what are we doing here?” We’re supposed to be teaching technology integration — helping teachers use technology effectively to complete projects and improve learning in other curricular areas. 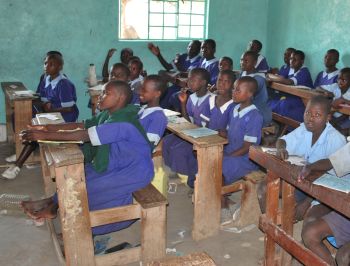 But as we made our school visits, it became increasingly clear that they’re not ready for that. Of the ten schools we visited, none had electricity. One had computers in a lab, but no reliable way to power them. Many of the schools had dirt floors. It was rare to see anything but the most basic of teaching materials. Student desks. Chalk. Sometimes paper and pencils. That’s about it. How are we going to help these teachers use technology effectively?

We decided to take a two-pronged approach. On the technology side, we focused on personal productivity. Classroom technology projects are so distant on their horizon that it doesn’t make sense to dwell on them. So we focused on gathering resources for preparing instruction, basic computer operations, and very simple use of productivity tools. On the pedagogy side, the emphasis was not on how technology affects classroom instruction, but on classroom instruction that better meets the learners’ needs while setting the stage for later technology use. So we (and, by “we”, I mostly mean iZAC and Jody) offered sessions on cooperative learning, backwards design, assessment with rubrics, and differentiated instruction.

The response was very positive. They liked the mix of pedagogy and hands-on practice. They didn’t mind the technological problems caused by unreliable equipment and unsteady electrical service. They were just happy to be using computers, and thrilled that we were there trying to help them. Many of the teachers will be sad to see us go.

I worry about the sustainability. We’re here for a couple weeks, and then gone. In South Africa, we built in sustainability through our NGO partners. We also invited the teachers to participate in a Ning, so they can network with one another and collectively support one another. In Kenya, though, the vast majority of the teachers in our workshops don’t have access to the Internet. They don’t have computers at home. They don’t have computers at school. Their only option for accessing the technology is going to the Suba center. It’s also apparent that Suba doesn’t have the resources to effectively support that many teachers. While they have a dedicated, hard-working group of teachers working at the center, they’re volunteers with many other responsibilities.

The good news is that the teachers themselves see the value in professional learning networks. So they’ll keep in touch with one another despite the challenges. Suba will continue to support them any way they can. They’ve already set up a new committee to focus on technology in education, and it’s made up of a district education official, two teachers, and a Suba representative. And Teachers Without Borders – Canada will probably be back next year for the second year of capacity building. We may not meet our four year target for self-sustained professional development, but we’ve made great strides this year, and this group may actually have a sustainable professional development model for educational technology in place before they even get the technology.