And, in the blink of an eye, a week is gone. Two weeks. Still, the thoughts pile up. Scribbled notes on paper napkins, open browser tabs with pages I mean to read and comment on. A draft email. An unfinished conversation. We’re at the point in the Change MOOC that I’ve lost track of which week it is. There are a lot of unfinished thoughts about the last couple weeks. I’m trying not to feel guilty about it or overwhelmed by it. It’s part of the experience. I can’t do everything. One advantage of the MOOC is that I can take it at my own pace, and at my own level of depth. I don’t have to do it all. And I keep telling myself I’m okay with that.

But to get away from the meta-course for a minute, there were two “ah-ha” moments for me with David Wiley’s work a few weeks ago. David has done a lot of work with open learning objects over the years, and has advocated for the open sharing of educational resources. Knowledge isn’t exclusive. We’re not really in a competitive business. If I share something I know, I still retain it. Some might compare it to love: the more you give, the more you have. I don’t know if I want to go that far with the metaphor, but it’s clear to me that I don’t lose anything by sharing so-called intellectual property.

Wiley points out that sharing IS education. The most successful teacher is the one who shares the most completely with the most people. Without the sharing, we don’t have education.

This model illustrates the difference between an e-book and a physical book. An e-book is not a tangible product. Amazon doesn’t keep a warehouse of e-books that they have to inventory and re-order. The number of books sold is just an entry in a database. The cost of distribution is essentially nil.

So why can’t we give these things away? Wiley’s Flat World Knowledge is trying that. With their model, a professor can adopt a text book, and even customize it to meet his or her own class needs. Then, the students can access it online for free. If they’d rather have a downloadable e-book version or a print copy, they can order one for a fee. So the content is open and extendable. But there’s additional value in the physical product that people are willing to pay for. Those payments finance the whole thing. Enough people buy the print book or e-book that it pays for the development of the book and the hosting of the web site.

The first “ah-ha” moment came here. These books are written by individuals or small groups of co-authors. They’re not wiki books. They’re not collaboratively developed. Just because it’s open doesn’t mean it has to be collaborative. In the K-12 world, I’ve been thinking about open textbooks for a long time. The problem is getting someone to write the books. But it’s always been a matter of finding a committee of teachers to do it. It doesn’t have to be like that. Just find one teacher willing to write a book. Find one person who’d like to see his name in print. And go from there.

Using this model, the Utah Open Textbooks program has managed to get the cost of a printed math textbook down to about $5. What’s better is that they’ve studied the use of open textbooks like this, compared with the big publishers’ $100 books. The result? Not surprisingly, students using the expensive books did no better than those using the open ones. As it turns out, the cost of the book is not the determining factor in student achievement.

This week’s Change MOOC facilitator, Rory McGreal, seems to be advocating for some of this as well. I’ve admittedly not been very engaged this week, but he’s a strong advocate for open educational resources, and is working with UNESCO to develop guidelines for the use of OER in higher education. 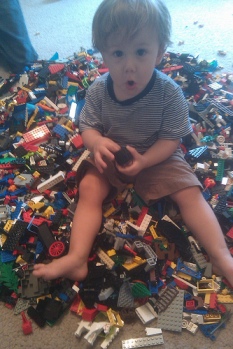 The other “ah-ha” moment of the Wiley week was his reusability paradox. Ideally, if we’re going to be scientific and efficient about learning resources, we should make discrete learning objects that can be re-used in many different contexts. Think of the learning objects — which could be bits of text, videos, online resources, activities, projects, and other media resources — as a giant box of legos. For my class, I’ll select the pieces I need, put them into the order that makes the most sense for my context, and build my class.

But the giant box of legos isn’t that popular anymore. More often, you see the specific box of legos. This box has all of the pieces to make one thing. There’s one car. One space ship. One castle. Because they’re designed to be very specific, the pieces are tailored to that use. There are a lot of specific pieces — engines, wheels, turrets, whatever — that are custom made for that kit. These lego boxes are really popular now, because they’re specific. The castle I build with the castle kit is a lot cooler than the one I make with the giant box of general bricks. But I can’t make a spaceship out of the castle kit. As the pieces become more specialized, they become cooler. As the learning objects become more specific, they become more relevant. Students are more engaged. The activities and questions and resources are more relevant. But they’re also less re-usable.

The key comes with the ability to remix. A willing teacher can take a handful of bricks from the general set and throw in some of the specialized pieces too. I want a castle on wheels with machine guns and jet engines. No problem. The Flat World Knowlege model allows some of that. So do cool projects like CK-12 Flexbooks. The ability for a teacher to take some open stuff and add their own flavor to it is a powerful one. If those can then be distributed to students affordability, and we can have enough of a critical mass to stop buying textbooks and other redundant resources, we may have something.

One thought on “Building Blocks”