For the first time in recent memory, I didn’t present at the eTech Ohio Educational Technology Conference this year. Last summer, I decided to take a year off from conference presentations, and instead focus on some of the big questions surrounding the future of education. In the intervening months, I have done a lot of reading, participated in several online networks, and had countless conversations with smart people about public education. It’s clear to me that our test-driven, standards-based, knowledge-transfer approach is not meeting our students’ needs anymore, and we are struggling as public schools to remain relevant. 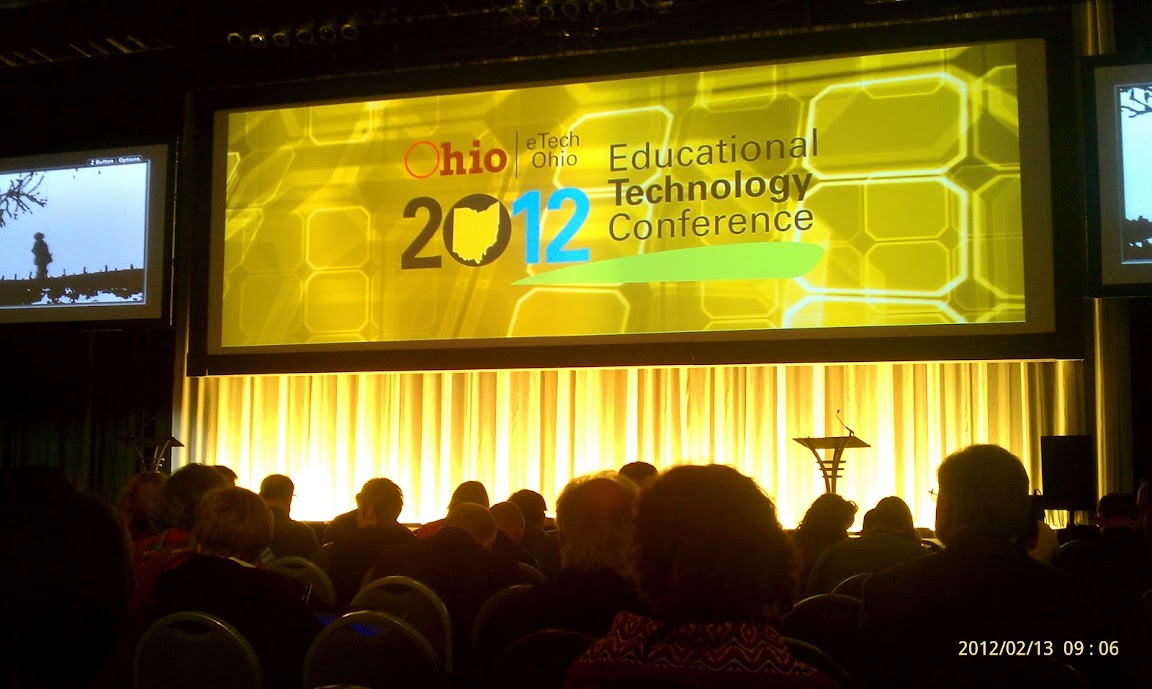 It was through this lens that I approached the conference this year. I’m looking for ways in which schools are reinventing themselves. While technology plays a role in that change, it cannot be the driver of it. Maybe I’ve been in this job too long. For the last 13 years, I’ve purchased computers, upgraded networks, replaced servers, and improved our technology infrastructure. I’ve fought for funding to replace computers, only to fight again to replace them again six years later. I’ve been responsible for both the purchase and the disposal of hundreds of thousands of dollars’ worth of technology. And while we’ve seen progress in our use of technology in the schools, we haven’t had the transformational change that we need.

So I stayed away from the gadgets. I don’t go in the exhibit hall. I don’t meet with vendors. I’m not interested in buying your amazing solution that’s looking for a problem to solve. For the most part, I also stayed away from the gadget-focused breakout sessions. Instead, I tried to focus on sessions that showcased bold initiatives for changing how teaching and learning is done in our schools.

The Keynotes
The keynotes didn’t help much. On Monday, Dr. Michio Kaku managed to win over a skeptical audience by personally taking credit on behalf of the physics profession for every major technological advance of the last 50 years. He then boldly predicted that technology is going to become more powerful, smaller, and less expensive in the years to come. He referred to wearable technology, like computer chips embedded in contact lenses. He described augmented reality, where a computer gives you real-time information about the things you’re looking at. He talked about hand-held MRI scanners and other amazing medical devices. But he failed to connect these technologies to education. While he advocated for more teaching about technology, he didn’t really address how these new advances are going to revolutionize teaching and learning, or what we, as educators, can do to prepare for it.

Tuesday’s keynote wasn’t much better. In a colossal miscalculation, Sascha Meinrath misjudged his audience. He gave a speech, not a presentation. He read from his stapled manuscript, often pausing mid-sentence to turn the page. He never strayed from the podium, and used no visual aids in his presentation. While the content of his speech was excellent, it was lost in the presentation style. Looking at the Twitter backchannel, for every message about the content of his speech, there were eight messages about the presentation style. Sadly, his points about the struggle between protecting and securing our rights and liberties online were lost on this audience.

On Wednesday, it was Brené Brown’s chance to take a shot at an engaging keynote. It wasn’t looking good. For starters, her career has centered around research on vulnerability and shame. But she immediately connected with her audience, and used a unique blend of humor, self-deprecation, and thoughtful insight to tie the ideas of inadequacy, vulnerability, and fear to teaching, learning, and technology. As she talked, she eloquently wove together the themes of embracing failure, continually striving for improvement, and engaging in learning communities. Given her research interests, her presentation was surprisingly inspirational. It left me with some hope that we really are going to figure out this next generation education business.

Leading Change
This optimism was echoed in the Leadership 2.0 breakout session led by Eric Sheninger. As a principal in New Jersey, Eric began forming a personal learning network a few years ago. He has embraced social networking tools, and transformed his school. He now leads a school where students take responsibility for their own learning. He affects school culture by including his teachers in the decision-making process and empowering them to set policies that are in the best interests of their learners. He shared many strategies for using social media in academic, professional development, and public relations contexts.

This is a stark contrast to the policy discussion held in the technology coordinators’ meeting. Megan Greulich, an attorney for OSBA, shared a number of changes that districts should be making to their policies to reduce liability and comply with state law. Among these changes are the inclusion of cyberbullying prevention language and updates to acceptable use policies to accomodate new e-rate requirements. Many of the attendees expressed frustration that curriculum is being driven through policy, and most seem to be caught between the “low liability” position of attorneys and school boards and the “high useability” needs of teachers and students. It’s difficult to find middle ground that will allow access to needed resources while minimizing the potential for costly litigation.

On the technology side, Joe Bires shared some insights on technology evaluations. Looking at school technology from a technical perspective, Bires specializes in evaluating technology initiatives in schools. He recommends gathering data from as many different perspectives as possible, and looking for the underlying reasons behind surface observations. It is important to consider the project in the context of the school culture, and to recommend a plan of action for improvement once conclusions have been drawn.

Blended Learning
One idea that is finally getting quite a bit of traction is blended learning. A group of teachers from Berea City Schools shared their experience going “paperless” in their classes by using a variety of tools. Essentially, they’re using blended learning resources like Moodle and Google Apps to minimize the amount of printing they’re doing. Our school district has similar goals, and it’s interesting to see that Berea is giving their teachers the flexibility to choose the tools that best fit their needs. David Hamman, a science teacher at Medina High School, shared a similar project. He advocates the use of focus groups and pilot projects to get started with blended learning programs.

I thought that I would see a similar program from Michael Pennington and Garth Holman. These two teachers work in very different schools, 30 miles apart. Their students collaborate on a digital wiki-textbook for their class. In this case, the focus isn’t on creating a textbook for future students to use as much as creating a lasting legacy of the students’ experience in the class. Over the last few years, students have revised, expanded, and improved the textbook to the point where it is used as a class text by other schools. But the primary goal is for the students to share what they’ve learned by creating an authentic, useful product. I was impressed by the teachers’ attitudes toward this project, and the sense of ownership they have been able to inspire in their students.

Google and Education
Despite my aversion to sessions that focus on the tools, I did attend three presentations that specifically addressed the use of Google Apps in education. As a district that heavily uses Google’s tools, it is always interesting to see the innovative things other schools are doing with the same resources. Senior Google Education Evangelist Jaime Casap was a featured speaker, and his presentation focused on the “why” question more than the “how” question. Why should we be using technology in education? What does technology buy us that can’t be done as easily without it? Casap focused on a need for innovation, adaptability, problem solving, and collaboration. He observed that about 10% of the world’s knowledge is available online, and we are acting like we have the world’s information at our fingertips. Our students are going to need a whole new set of literacies to thrive in a world where 70% of the sum of all human knowledge is freely available online, a milestone we’ll reach within the next generation. While Google’s tools help schools do this, his message focused less on what Google Apps can do, and more on the need to change the focus of education.

A group of teachers from Ross Local Schools also shared their use of Google Apps in a breakout session. Their session focused more on the logistics of operating a school than on the actual teaching and learning, but they shared some valuable perspectives on using shared calendars, Google documents, Forms, and Sites to communicate with parents, schedule shared resources like labs and conference rooms, and distribute web site management responsibilities across the school. North Canton’s Eric Curts went into more detail about Forms in his session, illustrating how they can be used for everything from self-grading short cycle assessments to kindergarten registration.

Better Design
One of the areas with which I struggle is that of design. I can create a functional web site. I can evaluate tools and resources and gadgets based on their usefulness, and I can do a cost-benefit analysis. But I’m not so good at creating and evaluating elegance. I have a hard time designing web sites that are intuitive to use and as visually appealing as they are useful. Zach Vander Veen’s session on Principles of Design helped with that. He provided some great ideas for organizing and presenting content in a way that is visually appealing and easy to follow. His focus was on organizing resources for online or blended learning, which fits well with some of our district goals. Alvin Trusty also addressed visual literacy in an entertaining presentation that explained how to create and use images to convey a particular message.

Final Thoughts
Overall, the conference is struggling with the same identity issues that schools are. We have discredited the lecture as the primary and most effective means of teaching, but nearly all of the conference’s sessions perpetuate the model of a speaker standing in front of a group of audience members and talking for 45 minutes. In many sessions, we still focus on the tools, the shiny gadgets that everyone swears are going to make a difference in education. I talked with two of the conference leaders about this, and encouraged them to solicit sessions that are more interactive and participatory. I suggested taking a page from the Educon book, and specifically asking, as part of the proposal form, how the presenter intends to engage the audience in a conversation, rather than just talking for an hour. Hopefully, they’ll encourage presenters to start doing that in future conferences.

It was also disheartening to see that the unconference flavor of last year’s conference was gone. Due to the weather, last year’s conference saw many sessions cancelled, and the attendees who were left started creating their own sessions. It was pretty easy to add a topic to the agenda, find an open room, and hold an impromptu session. This year, I wasn’t aware of any of these spontaneous sessions.

While I still consider the conference to be time well spent, I think, like public schools, it’s time for eTech to rethink the purpose for the conference and work to meet the attendees’ changing needs.

4 thoughts on “Reflecting on #OETC12”