Would you ride in a driverless car?

Let’s say you’re in Pittsburgh or Phoenix and you call for an Uber. The car rolls up, and there’s no one inside. Do you get in? 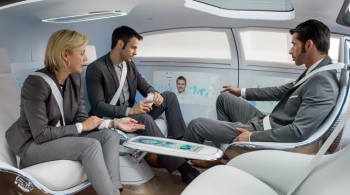 Your answer might depend on how the car is configured. If there is no driver, there is no need for a driver’s seat. If the car itself has no steering wheel, pedals, or other controls, does that make a difference? Actually, if no one is driving, it’s not even necessary for everyone to face the direction of travel. What if the seats inside were configured like a train or a limo, where they face each other? Does that make you more likely or less likely to get in?

On the other hand, maybe that’s too radical. Would you feel better if there were a robotic driver: a human-like machine that mimics the actions of a human driver? While it wouldn’t actually be necessary to make the car work, it would give the car a sense of familiarity that might make you more comfortable.

We like innovation. We want to use products and adopt ideas that show that we’re making progress. My new phone needs to be better than my old phone. New appliances have fancy features that outpace their predecessors. Cars have their steady march toward increased safety and comfort that make them more attractive than their predecessors. The new products have to be new enough that we get a sense that we’re not just throwing our money away on the same old thing.

But when manufacturers innovate too much, they lose the market. Many people wouldn’t consider the early smartphones that didn’t have physical keyboards. Tankless hot water systems haven’t caught on, despite their energy efficiency and convenient size. There’s little difference in driving performance between my current hybrid car and the gas one that it replaced, but the new one has has 50% better fuel economy. Still, you don’t see many of them on the road. They’re not quite familiar enough to gain traction.

Innovation has a sweet spot. If a new product is not different enough from what we already have, it is rejected for its banality. At the same time, if it’s too different, it’s rejected as too radical.

In social psychology, this idea is called optimal distinctiveness. In social groups, we want to be alike enough to be accepted as part of the group, but we also have a need for differentiation and individuality within the group and between different groups. Jonah Berger discussed this on a recent episode of Hidden Brain. The theory also explains why, for example, teens moved away from Facebook when their parents started signing up.

But looking at this through an institutional lens, it suggests that we can’t just scrap the cultural tradition of public education and start over. Imagine for a moment that we could reach some consensus on what it is that schools should be doing. There’s a magic list of, say, ten outcomes that students should have when they complete their schooling. We have a reasonable way of measuring those outcomes, and we can all more-or-less agree that successful schools are the ones whose students consistently meet those goals. (I know. We’re somewhere over in that ill-defined area between Fantasyland and Tomorrowland. Don’t worry. We’re about to ride the teacups into Wonderland.)

Now further imagine that we know how to accomplish those goals. We have a defined strategy with predictable outcomes. We know how to most efficiently provide instruction to meet the defined goals, and we have proven intervention strategies that determine when students are struggling and provide the support they need to succeed.

The problem has been defined, and its solution has been articulated. But we still can’t do it. Whatever solution we come up with has to be optimally distinct. If we have a teacher standing at the front of the room delivering content to students, and the student answering questions and doing practice problems for homework, and a test every two weeks to determine what they’ve learned, then we aren’t being very groundbreaking. (I would also argue that we’re not getting beyond the recall and skill Depth of Knowledge levels). But if we throw out the idea that we’re working with 25 students in 45 minute blocks of time, then we are accused of adopting untested new education fads and using our children as guinea pigs.

So we’re walking this line of innovation. We’re keeping traditional classes, school calendars, and bell schedules. But teachers are leveraging technology to extend and expand learning beyond what can be accomplished in a 45 minute class period. We could provide wholly online courses, but our staff, students, parents, and school community are more comfortable with classes that meet face to face. We use short formative assessments to gauge student learning and adapt instruction to meet each student’s needs. In some cases, this process could be automated. But that pushes too hard on questioning the role of the teacher, and we have no intention of doing away with teachers.

I once proposed an idea for middle school where each team had a different focus. There would be an arts team and a STEM team. Both take the same core classes. Both have project-based curricula that focus on inquiry. The arts team would incorporate an emphasis on visual and performing arts, and would consider the academic subjects from that perspective. The stem team would focus on process, scientific method, and innovative design. The teams would always have some exposure to the other perspective, but the concentration would follow the passions of the student. Families would be able to pick which team best suits the student entering in sixth grade, and they’d follow that path for three years until going to high school.

The conversations about this idea are always good ones, but it’s really too different from our current approach to be practical. To get there, we need to focus on the smaller pieces first. Let’s spend some time trying to emphasize inquiry in some units in some courses. Let’s do some authentic project-based learning at each grade level, without totally transforming our school into a project-based learning center. We have to embrace the arts, and acknowledge the importance of stem. We have to make things different enough to be making real progress, but not so different that we don’t recognize our schools anymore.