Daryl Davis is a piano player. In 1983, he was playing country and western music in a bar in Virginia. A patron came up to him and remarked that it was the first time he had ever heard a black man play piano as well as Jerry Lee Lewis. Davis explained that Lewis had learned to play from black boogie woogie and blues piano players. The man was unconvinced. Davis explained that Jerry Lee was a friend of his, and the two had discussed his influences many times. 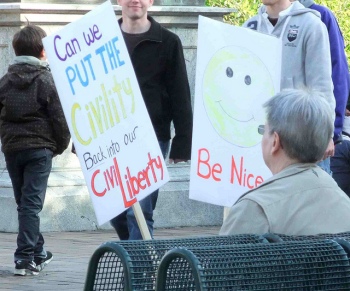 The two struck up a conversation, and the man admitted that he was a member of the KKK. Eventually, Davis met with several high-ranking klan members, and even befriended some of them. He found that many klansmen had strong, deep-seeded misconceptions about black people. By forging respectful relationships with them, he was able to counter the stereotypes. It’s harder to hate a group when you know and respect someone who is part of that group.

A few years ago, Davis told his story to Nick Van der Kolk on the excellent Love & Radio podcast.  You should invest 40 minutes and go listen to it. It’s a compelling and entertaining and amazing story. But when you’re done, come back. Because there’s more.

A couple weeks ago, Davis returned to Love & Radio. We seem to be in a world where there are more divisions among us than ever before. And he’s an expert at working to bridge those divides. So we should listen to what he has to say. Go listen to that one, too. Or, if you have to, just read my notes. These are Daryl Davis’s ideas, as told to Nick Van der Kolk, listened to by me, and summarized for you. So how do you have a civil conversation with someone you disagree with?

Do your homework. Before going in, know what their position is. Learn as much as you can about their argument, the reasons behind their beliefs. Ideally, you should be able to make their argument as well as you can make your own.

Have a conversation, not a debate. If you have a debate, it’s about convincing the other side that you’re right. It’s argumentative and confrontational , and it’s very unlikely that you’re going to be able to change their mind. Instead, invite them to have a conversation. Go in with the idea that you want to understand why they feel the way they do. Give them a safe space to explain themselves.

Look for common ground. You agree on something. You can find some area where you’re both on the same page. I was discussing the Affordable Care Act with someone a few months ago, and we were on diametrically opposite sides of the issue. Finally, I looked for common ground. “Can we agree,” I asked, “that when someone gets in a car accident and goes to the hospital, we’re not going to refuse to treat them?” He agreed. Great. All we need to do, then, is figure out how to pay for it. By finding some common ground, you start to build a connection. The more you do that, the less important the differences become.

Be patient. You’re not going to convert someone overnight. Whatever the issue is, there are roots underneath it. You’re not going to spend an hour discussing abortion or immigration or social programs and convince them to change their mind. But maybe you can give them one thing that they’ll think about later. Give them one little reason to just move their position an inch. Be pro-active. Talk to people who disagree with you. Learn from them, and give them the opportunity to learn from you.

Avoid condescension. Don’t be insulting. You will hear opinions that you don’t like. Everyone is entitled to their opinions, and remember that you’re giving them a safe space to express them. But everyone is not entitled to their own facts. When they say something that is untrue, call them on it. Ask for evidence of their claim. Or, if you have evidence that counters their point, share it. Correct the facts, but don’t be mean about it.

I think maybe it’s time to venture out of our bubbles and echo chambers once in a while to try to have some real conversations. I’ll close my HuffPo and Mother Jones browser tabs for a little while. Maybe you can stop listening to Breitbart and Fox News for a couple hours. And we can look for common ground.